My experiences with gathering pollen

I started gathering pollen twelve years ago. First, I bought ten used external pollen traps of different types. Since I did not have any experience gathering pollen at the time, I struggled to get my first yield. The first problems occurred when installing pollen traps on the beehives; bees were passing the pollen screen, so the yield was not good. But if the beekeeper does not know how much pollen one bee colony can bring, they quickly settle for the yield. I used these pollen traps for about three years. After talking to other beekeepers, I quickly realised that I do not have very good pollen traps. So I bought five new ones, installed them on the beehives with difficulty and started gathering the pollen. The pollen traps were good. I gathered a lot, and on top of that, the pollen was almost free of impurities. At first, I was very pleased as the yield was good. But there were quite a few problems. The first was the problematic installation on the beehive; the second was the gathering of pollen, especially the removal and installation of drawers on the pollen trap, where bees almost always attacked me. Worst of all, the entire thing got completely mouldy. The pollen drawers could not be cleaned at all. I only used them for one year. The very next year, I joined a project team whose goal was to improve the pollen trap. We succeeded in this, and I made the prototypes. Installation on the beehive is easy; it is attached with one angle screw already located on the beehive to close the alighting board. Pollen obtained from this pollen trap is clean and requires almost no additional cleaning. However, in my opinion, the best acquisition is the pollen container, which is made entirely of stainless steel, is airy and has no corners where dirt would accumulate. The elongated sheet metal on the front protects pollen from direct exposure to the sun and rain. It does not get mouldy and, very importantly, is easy to clean under running water or in the dishwasher.

The process of gathering pollen

I usually start gathering pollen in early May. We can also start as early as mid-April, but I prefer to leave the first pollen to the bees to develop better and faster. It is recommended to install pollen traps on the entire apiary. If we do not install pollen traps on all beehives, the beehives that do not have them may start to fill up quickly with bees from the beehives where pollen traps are installed. This only occurs when we start gathering pollen, but there are no differences later on. I have installed them on two rows of beehives, but the third row does not have them. I install pollen traps on the beehives in the evening when the bees are already in the beehives. I remove the pollen screen from them to make it easier for the bees to move through it. Usually, in the afternoon of the next day, the bees are already moving smoothly through the pollen trap, so I install the pollen screen back in the evening. The first small yields of pollen are in the pollen containers on the next day. If the bees start to gather on the pollen trap and do not normally pass through the pollen trap, I remove the pollen screen for a short time so that they can return to the beehive. Every night I regularly collect the gathered pollen, clean it if necessary, pack it by welding it in food storage bags and store it in the freezer. Most of the pollen I sell is fresh. I also dry some pollen in the pollen drying chamber. Pollen containers need to be cleaned regularly. I wash them under running water or put them in the dishwasher twice a week. Of course, they must be made of washable material.

I only gather pollen from healthy bee colonies that do not have chalkbrood. Bee colonies need to be strong enough. Until last year, I gathered pollen only on production bee colonies. Last year, however, I tested gathering pollen at home on spare bee colonies in nine-frame beehives. The yield was not as great as in previous years, but gathering pollen and cleaning the containers was much more manageable, mainly because I have colonies at home behind the house, and I do not have to go anywhere else. I will continue the practice this year as well.

*Gather pollen from healthy colonies that do not have chalkbrood.
*Gather pollen regularly, at least once a day.
*Regularly clean the pollen containers, if possible, under running water.
*Store the cleaned and packed (fresh) pollen immediately in the freezer, and close the dry pollen in a suitably sealed container.
*Gather pollen from strong bee colonies. 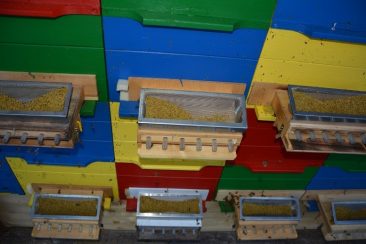 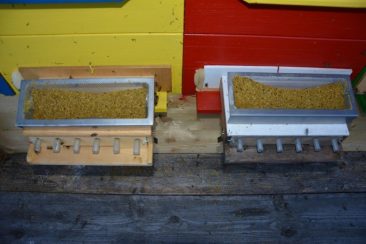 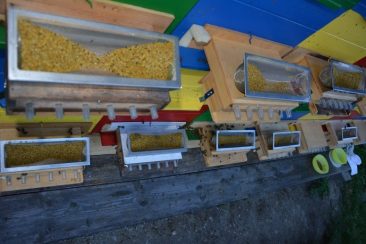